Over the past several years, the word "shortage" has figured prominently in the semiconductor industry. From automotive to industrial, very few businesses were left unscathed by the lack of chips necessary for the technology of today. Alongside the chip shortage, an even larger scarcity looms – a rapidly shrinking workforce.

As the competition for talent intensifies, the United States’ government and manufacturers with plans to expand domestic semiconductor production are looking for creative ways to close the employment gap. The solution they are pursuing is to invest in programs now to pave the way to the future.

How We Got Here and Where We Are Going

The early days of the semiconductor industry in the United States saw immense growth and innovation. In the 1960s, the government used fiscal spending and government contracts from the Department of Defense (DoD) to bolster invention and production. Additionally, the DoD enforced open communication and made sure that technology was shared between large and small firms.


This created a system where large firms were able to produce products while small firms could focus on innovating at a rapid pace, and both sides could do so at lower cost. It nurtured a healthy manufacturing labor market for production and brought in highly skilled engineers with the promise of creating new groundbreaking technologies.

The regulations put in place by the DoD valued modernization over revenue, but that slowly changed as the industry grew beyond a point where the government could regulate firms’ agreements. Government contracts dropped dramatically in the 1970s, but thanks to technology being integrated into businesses across the country, there was no lack of profits for the semiconductor industry.

As policies shifted from fostering experimentation and wide availability of technology, massive “champion” firms and asset light design firms began to take over the landscape. This created an infrastructure that had supply chains supporting the requirements of the larger companies with more capital and created bottlenecks for those who lacked the funds to support substantial orders. 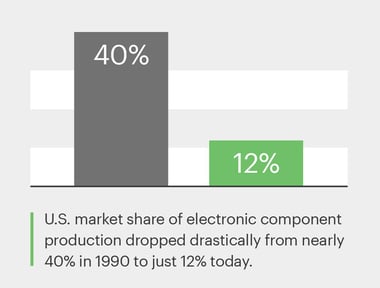 Global competition increased and U.S. companies began consolidating and focusing on design instead of production. Fabless firms, which focus on design and sale while outsourcing fabrication to semiconductor foundries, were born, and supply chains became even more dedicated to supporting bigger more well-funded companies. And, as other countries expanded their own design capabilities, the U.S. slowly lost its standing in the forefront of the semiconductor industry for both innovation and job opportunities.

U.S. market share of electronic component production dropped drastically from nearly 40% in 1990 to just 12% today. But this is slowly changing, as companies pivot their expansion plans from overseas locations back to the U.S and the government reinvests in the industry.

Intel has provided upwards of $20B in fabrication plant construction in the U.S. Micron has announced plans to finance $40B in new manufacturing for memory chips, a necessary component for consumer products like computers and other electronic devices. Micron’s contribution alone will bring the U.S. market share of memory chip production from below 2% to over 10% within the next 10 years.

Other manufacturers have followed suit — Samsung, Texas Instruments and GlobalFoundries have announced plans to increase their U.S. manufacturing within the next three to five years. Qualcomm, the world’s leading fabless semiconductor company, will increase domestic production by upwards of 50% over the next five years. Qualcomm is also partnering with GlobalFoundries, and together, the companies will utilize over $4.2B in funding to expand upstate facilities to manufacture chips.

The Stats Stacked Against Us

While this expansion is exciting news for the semiconductor industry, the worry is that there will not be enough workers to staff the new facilities. Reports from talent management company Eightfold.ai project that the U.S. semiconductor industry will need between 70,000 and 90,000 new workers by 2025. These numbers will only satisfy the most critical workforce needs.

Recruiting individuals with the right skillsets has been a challenge, as these positions require highly skilled and trained talent. For some companies, it can take more than a year of global searching to find a single PhD-level engineer interested in new opportunities. On top of the lengthy recruitment period, it can take another nine months to secure a visa for an individual to relocate if they are not already U.S. based. 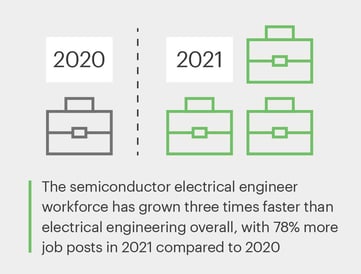 The competition from companies both in the U.S. and abroad makes finding trained individuals daunting. MediaTek, a chip development company based out of Taiwan, has attempted to grow its business in the U.S. over the past year, but the shortage of skilled talent has stalled that progress. Out of the company’s new hires, more than 80% have a master’s degree or PhD, making finding employees even more challenging, as the competition for such highly skilled talent is steep.

The question is, how does the U.S. bring the global talent closer to home and expand the number of candidates to fit the industry’s needs?

How to Invest in the Future Workforce

President Biden signed the bipartisan CHIPS and Science Act into law on August 9th, 2022. The bill allocates $52.7B in federal subsidies to domestic chip manufacturing, with funds earmarked to upskill, diversify and expand the industry’s workforce.

Incentives included in this bill consist of $39B towards manufacturing and $13.2B in R&D and workforce development. These enticements aim to create tens of thousands of construction and manufacturing jobs and inspire private investors to increase funding.

The goal is that companies will want to invest in the regional innovation and technology hubs that this Act hopes to create. These hubs will utilize the $10B allocated by the CHIPS and Science Act to generate additional jobs, develop local economies and provide opportunities to communities throughout the country to be a part of the growing technology industry.

The President’s Council of Advisors on Science and Technology (PCAST) provided recommendations to turn that goal into a reality. The full report will be released this fall, but some of the high-level takeaways include:

The U.S. Bureau of Labor Statistics reports that science, technology, engineering and mathematics (STEM) job openings are positioned to expand 11% between 2020 and 2030. To support this growth, the U.S. National Science Foundation has pledged $50MM to help students and teachers develop learning opportunities. This includes increased funds for education and training in marginalized and under-resourced communities around the country, from grades K-12 to community colleges, and other undergraduate and graduate schools.

However, the burden of investing in education doesn’t just fall on the government. Intel has joined with universities and community colleges to devote around $100MM over the next 10 years for STEM programs in the hopes of expanding the workforce for the facilities currently being constructed. These resources will establish the Intel Semiconductor Education and Research Program in Ohio, where Intel plans on building its future facilities.

If companies hope to encourage students to pursue a career in the semiconductor industry and work for them over the competition, they should invest in work training programs, and where possible, allocate charitable giving to education programs like Intel is doing.

There are no quick-fix solutions to the semiconductor and manufacturing workforce shortage. It will take a significant investment of time, money and patience to bridge the gap between demand and personnel availability. If the U.S. hopes to reinvigorate the industry, the government and manufacturing companies will need to work together to build a strong future.