Employee Spotlight: In the Boston Office with Chris Kolodko 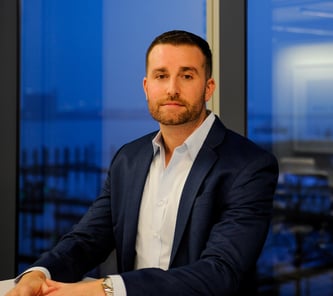 The first employee spotlight of 2021 showcases the remarkable contributions of Chris Kolodko, Fusion Worldwide’s sales manager in the Americas region. Chris’ impact is felt throughout the organization as he raises the standard of excellence and shares his passion with the office daily.

“Chris bleeds Fusion green, he is a hardworking, dedicated, knowledgeable and fun loving. He is also an exemplary employee with high emotional intelligence and expansive knowledge of the business, combined with a tireless work ethic. We could use 100 of him,” states Luke LeSaffre, Director of Sales, Americas.

Chris has been a part of the Fusion family for almost 11 years and has been integral to the company’s success – having previously held roles in the purchasing department, including senior buyer, finished goods global commodity manager and memory global commodity manager. Outside of the office, he loves working out, snowboarding and occasionally dj’ing.

Chris wishes that more people knew what his daily life at the office is like. “A lot of people think I work in a cubicle behind a desk all day, which is not the case. The open floor plan with constant trading activity creates an atmosphere which I have learned to love over the years.”

According to Chris, the biggest challenge he faces at Fusion Worldwide is getting to know co-workers from other regions on a personal level. He does admire that the company has given him the opportunity to travel to the offices in Amsterdam, Singapore and Guadalajara, allowing him to bridge the gap with many of his international colleagues.

When thinking about his time at Fusion Worldwide, Chris lists the Boston office’s yearly awards night as one of his favorite experiences. He enjoys having a fun night with his co-workers where they can celebrate their achievements and get roasted by Paul Romano, COO at Fusion Worldwide.

Chris’ personal goal is to lead an even bigger team to the company’s best year yet. He does so by keeping his mantra in mind, “work hard, play hard,” because having the right balance is key to his success … and his team’s.